AJT’s pop-ups are spontaneous events to celebrate and attract Jewish theatre and performance nationwide by the Alliance’s members. If you have an idea for an Alliance Pop-Up or Alliance Virtual Pop-Up – that is, a specific show or performance to offer discounts to Alliance members – see the submission criteria below.

Got an event that could be an AJT pop-up? Fill out the pop-up event form (PDF or Word) and email it to Jeremy Aluma.

Find out here about upcoming and past pop-up events!

It’s part TED Talk, part Play Reading and part American Idol. It’s unlike anything else you’ll see on Zoom this month, and it’s a total blast. The Jewish Plays Project has sorted through over 150 plays, vetted them with the amazing JRT Readers in Buffalo, and gotten it down to just 3 Finalists. Now we need YOU to help us choose a Buffalo winner!

Contact: David Winitsky, david@jewishplaysproject.org
You must register to attend the Zoom call. 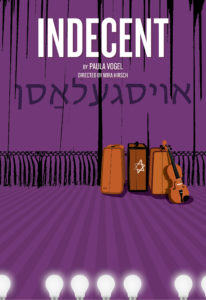 Come join us for a performance of Indecent, which is directed by former AJT Board President Mira Hirsch. Mira will lead a talk-back session after the show.

Tickets can be purchased calling the box office at 678/528-1500.
To get a 10 % discount, please use KIMMEL as your code. The discount does not apply to service fees.
If you plan to come, please contact Hank at hwkimmel@gmail.com

www.theatricaloutfit.org for more info
Please feel free to bring friends and family. Tickets are going fast. The show runs about two hours with no intermission.
If you go on line, the theatre will show that tickets are sold out. Some tickets are being held for us until Feb. 21 so that’s why you need to call the box office before that date.
The short video will be insight about the show. 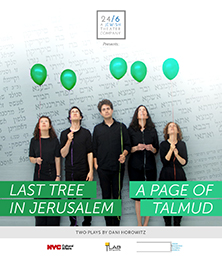 Tickets are $18 with for members, use code: AJT
Meet up with Artistic Director of 24/6, Yoni Oppenheim and other AJT Members.

Riven by internal strife, ecological disaster, and interference from foreign powers, can society survive? Set nearly two millennia ago but still resonant today, acclaimed Israeli playwright Dani Horowitz’s interrelated plays Last Tree in Jerusalem (world premiere translation) and A Page of Talmud tell the seminal Talmudic stories “Kamtza and Bar Kamtza” and “The Oven of Achnai.” These timely Jewish stories examine the cost of humiliation and explore what it means to be a member of a community, to be a leader, to have moral courage, and to resist.

Meet up with playwright and Alliance for Jewish Theatre Board of Directors’ member, Wendy Kout and attend her acclaimed play, Never Is Now.

This drama, set in a contemporary theatre company’s rehearsal of a play about the Holocaust, explores what survivors teach and warn in our own perilous times. Never Is Now is adapted from Survivors by Wendy Kout commissioned, developed and produced by the CenterStage Theatre at the Louis S. Wolk Jewish Community Center of Greater Rochester, Ralph Meranto, Artistic Director.

At award-winning Skylight Theatre Company, 1816 ½ Vermont Avenue, Los Angeles, CA. 90027. Use code NISNOW for 20% discount on Premium ($32.80) and Standard ($28) tickets for the Pop Up Event or any performance. Let Wendy know you’re attending at koutster@gmail.com.

“Go see it. An extremely rare moment in time in which a portion of history…is presented in a very unique unveiling. The voice is different and you will be different for seeing it” – Broadway World

♦ On March 30 at 8 PM, meet-up with AJT president Hank Kimmel and attend the acclaimed Off-Broadway play, A JEWISH JOKE starring Alliance for Jewish Theatre member Phil Johnson. Recently at the Bunbury – ShPIeL Identity Theatre project in Louisville and in Chicago. This incredibly relevant show portrays how Jewish humor is not only a defense against the Hollywood blacklist, but how it can also be a source for wisdom, as meaningful as the Talmud.

“As he tells Jewish jokes from his “collection,” a box full of index cards, Johnson wonderfully channels a bygone era of Jewish funnymen, who never forgot to laugh, even during the terrors of the McCarthy witch-hunt.”
— Max Maller – The Chicago Reader

♦ On April 1 at 2 PM at the 92nd St Y in New York City’s, Buttonweiser Hall, a public conversation will be held entitled “Artists Facing Anti-Semitism” with Judy Gold and David Y. Chack.

Judy Gold is an Emmy Award winning comedy writer and stand-up comedian, actor (Off-Broadway in 25 Questions for a Jewish Mother and The Judy Gold Show: My Life as a Sitcom), and producer. She was featured in the film Making Trouble, a tribute to female Jewish comedians produced by the Jewish Women’s Archives.

This is an un-ticketed “first come, first served” event and is part of the Conney Conference on Jewish Arts from the University of Wisconsin. 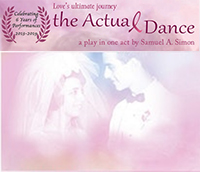 A performance of AJT Showcased The Actual Dance, a love story told through the eyes and heart of a Jewish husband as he struggles with what everyone expects to be his wife’s losing battle with breast cancer. The story takes the audience on an emotional and uplifting journey that rewards them with an unexpected happy ending, and a universal, life-affirming lesson of hope and faith. The Actual Dance will make you laugh, cry and then cheer!

The Actual Dance, a play in one act by Samuel A Simon, will have two AJT pop-ups:

Theatre Ariel, located in the Philadelphia area is presenting AJT president Hank Kimmel’s newest work, as part of their 2016-17 Salon Season of Jewish Theatre, in the intimate salon setting of a home on February 12, 18, and19. Location will be sent after tickets are purchased.

Divided Amongst Ourselves by Hank Kimmel is a world premiere! Rabbi Samantha Marcus and her three sisters – a successful developer, a struggling tennis pro and an emerging spiritualist – have all been out of touch for years. Following the death of their father, they reunite to examine their shared legacy and divide the estate.

Theatre Ariel has a limited number of tickets available for Alliance members at the $18 (half-off) discount price. Join us on either February 12, 18, or 19. Use the code AJTPOPUP.

Opening night is already sold out so get your tickets right away! Visit www.TheatreAriel.org.

From her show business family in the Bronx, to a WASP wedding, to her first step on a comedy club stage and life as a single mom, Monica Piper shares the milestones and moments that shaped her life with the same signature wit found in her writing on, Roseanne, Mad About You, and her Emmy Award winning work on Rugrats.

At Mosaic Theatre, on September 25th:

Buy your tickets, then let us know you’re coming, at chack@iglou.com

Listen to the entire panel, or read a recap (below):

Catch the latest in the November 2021 Newsletter!