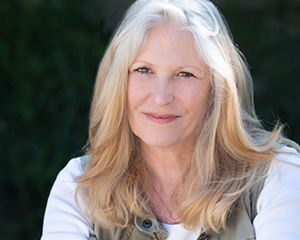 Wendy Kout is an award-winning writer/producer of stage, film, virtual screen and television, whose work has been appreciated around the world.

Stage credits: Never is Now, had an acclaimed world premiere at Skylight Theatre Company in Los Angeles, September 2019 and was also performed at the USC Fisher Museum and the Museum of Tolerance in Los Angeles.   The school tour of the play was about to launch when the pandemic struck.  April 6, 2021, Quarantine Players of Washington, D.C., is producing a virtual production of the play to honor Holocaust Remembrance Day.  We Are the Levinsons, world premiered at Minnesota Jewish Theatre Company.  It won BroadwayWorld Regional awards for Best Play and Best Ensemble Performance and has its third production at the New Jewish Theatre in St. Louis in 2022.  Naked in Encino, world premiered at CenterStage Theatre in Rochester, NY, and won Marlowe Awards for Best New Play and Best Production, Comedy for its And Toto too Production in Denver, Colorado.  Don’t Blame Me, I Voted for Helen Gahagan Douglas, co-written with Michele Willens, was an O’Neill Conference Finalist and has been produced as a fundraiser in NYC and L.A. for The Nation magazine, in L.A. for People for the American Way and in Washington, D.C. for National Women’s Law Center.  Survivors, inspired by the lives and testimony of Holocaust survivors, was commissioned by CenterStage Theatre and spring 2022 will be its third year of touring Rochester schools.  The Holocaust Education Project of Philadelphia has chosen Survivors to be produced by Theatre Ariel and tour schools in March 2022.  Other school touring productions of the play are set for 2022, in St. Louis, Western Massachusetts and Victoria, B.C.   Wendy’s virtual play credits produced by Skylight Theatre Company are Courage Takes the Stage, co-written with Michele Willens, Wake Up Call, co-written with Jeff Reno and Wendy was part of the creative team who created, We the People, which served as a warning about our threatened democracy in 2020.

Film credits include co-writing and co-producing Jacob the Baker: The Inspirational, which is presently in post-production.  Directed by Gev Miron, featuring Noah benShea and music composed by Sharon Farber, the film was shot in Israel, Denmark, South Korea and Los Angeles and aspires to bring comfort and inspiration to audiences around the world.  Dorfman in Love, produced by Leonard Hill Films and starring Elliott Gould, Sara Rue and Haaz Sleiman, won Best Film at the Hollywood International Film Festival and Marbella International Film Festival and Best Comedy at the Los Angeles Jewish Film Festival and Miami Jewish Film Festival.  The film has received four and a half stars on Amazon.  Wendy has developed film projects for Barbra Streisand’s Barwood Productions and has also developed films for Producer Laura Ziskin at Touchstone Pictures and Director/Producer John Hughes at Universal Pictures.

Television credits include Creator and Co-Executive Producer of the Golden Globe and ASCAP award-winning ABC series, Anything But Love, staring Jamie Lee Curtis and Richard Lewis.   Wendy was also on the writing/producing staffs of Robin Williams’ Mork & Mindy and Jane Fonda’s 9 to 5, and wrote a breakthrough episode for The Days and Nights of Molly Dodd, where Molly falls for a Hasidic Jew.   Wendy also developed television projects for Lifetime and Paul Reiser’s Nuance Productions.