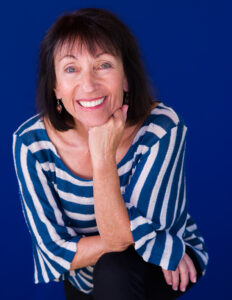 Stephanie Satie is an actor/playwright who often writes plays that explore the way refugees and immigrants respond to disruption and relocation. She’s written and performed three critically acclaimed solo plays — Refugees, published by Samuel French, Coming to America and Silent Witnesses, based on interviews with child survivors of the Holocaust (multiple award winner). Other plays include: The Last Parade, (formerly Leon’s Dictionary) which will have its world premiere at Interact Theatre, Philadelphia in February 2023. Set in Ukraine in the 1990s as the Soviet Union crumbles, a Jewish family tries to emigrate in the midst of chaos, both internal and external. The play resonates with events taking place today; (semifinalist at the O’Neill Playwrights Conference and finalist at Ashland’s New Play Festival and Jewish Play Project). Other plays include Say Goodnight George – the Final Episode, inspired by George Burns and Gracie Allen; The Martyr of Moscow inspired by Anna Politkovskaya, dissident Russian journalist, who was assassinated in 2007. Her most recent play is Ukrainian Railroad Ladies Waiting for the Call, a serio-comic dystopic play. Her heart aches for the people of Ukraine.

During the pandemic, she wrote several plays, one presented by Women in the Arts and Media Coalition, and a short film that was a semi-finalist at the Prague Film Festival. Stephanie divides her time between writing and performing and taught literature and writing at California State University, Northridge.