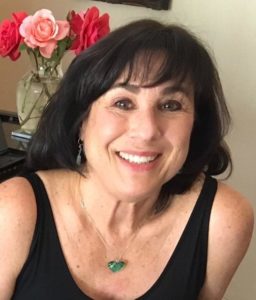 Sandy Shanin is a composer, songwriter and lyricist. She has composed the music for two Jewish-themed musicals (see Jewish Themed Musicals, below) as well as three other musicals. (see below) In addition to musicals, Sandy has composed several choral pieces on Jewish themes.  Her lyrics (Jocheved) were included in the oratorio entitled Women of Valor by composer Andrea Clearfield. It was recently recorded and released on Albany Records (performed by the Los Angeles Jewish Symphony with Tovah Feldshuh narrating. Sandy is a two-time winner of the Jewish Music Commission’s composer competition.

Retchitza, a Russian shtetl. 1900.  A lowly wagon-driver seeks a wife.  Who in Retchitza would marry off his daughter to an uneducated slob like Herschel?  Nobody.  The matchmaker travels to a distant town and returns with Gittle.  Gittle has an uncanny talent and a temper.  She lets loose with volatile curses – which come true!  Her final curse ends in a disastrous lesson that sometimes you don’t want your wishes to come true – too late for Gittle.

http://sandyshanin.com/musicals/the-spark-hannah-senesh/
How does a woman with a poet’s heart develop a warrior’s courage as she faces her brutal Nazi interrogator?

Stark reality surrounds Hannah Senesh, a 23-year old Hungarian Jew who has been captured by the Nazis after parachuting behind enemy lines in an attempt to save Hungary’s Jews. To withstand the harsh interrogations of the Warden, who wants Hannah to reveal the code to her military radio, flashbacks reveal how she mentally escapes by reliving joyous times from her youth in Budapest and her years “working the land” in Palestine. In one of those flashbacks,  Hannah, then in Palestine,  decides to join 31 other Jews who became British Paratroopers with the goal of forming a resistance movement in Hungary.  Among the group is Yonatan, whose love helps sustain Hannah in prison. Hannah remains locked in a struggle of wills, even as her beloved mother is imprisoned as well.

OTHER MUSICALS
Women in Love,   A musical based on the novel by DH Lawrence
Music:  Sandy Shanin
Book/Lyrics: Meredith Stiehm (https://www.imdb.com/name/nm0825284/)
http://sandyshanin.com/musicals/women-in-love/

Women in Love, based on the novel by D.H. Lawrence, takes place in England, 1920. It follows the story of two sisters, who make a pact never to marry, challenging the social mores of the time.  As the sisters fall in love with very different men, their suitors become involved with each other in a passionate and confusing friendship with tragic results.

Magic leads to mayhem in this tragic-comic musical tale of love, lust, power and madness, adapted from the classic 1001 NIGHTS.

Fourteen year-old SHAHRAZAD, a renowned story teller, has been in love with the young SULTAN since earliest childhood.  When the Sultan’s wife betrays him, he becomes a maniac, wedding, bedding and beheading 45 virgins on 45 successive nights.  Hoping to cure his madness through the power of her love, Shahrazad weds him and is about to be beheaded herself, when her feisty fortune-telling sister, DINARZAD, pops up from under their bed.  She foretells of his death unless Shahrazad can save him through the power of her stories.  He gives her one night to convince him, while Dinarzad hides a dagger under the bedcovers for the unsuspecting Shahrazad to use to protect herself.