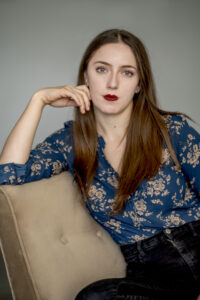 Rosie Glen-Lambert is a Los Angeles-based theatre director, producer, and dramaturg. She is the Artistic Director of The Attic Collective and the Literary Manager of Inkwell Theater Company. Rosie is known for her inventive storytelling, her “more is more” approach to props, and her commitment to the collaborative process.

Everyone sees movies. Everyone goes to concerts. So why is it that theatre is the art form that has been rejected by so many as stodgy, unwelcoming, and “not for” them? Rosie wants to make up for that bad production of “Two Gentlemen of Verona” you were forced to watch in middle school. She believes theatre should be relevant and inclusive, which has led her to a deep appreciation for new work, devised performances, and purposeful productions and reimaginings of classic works. She is committed to building a world where everyone sees the theatre as being a place where they belong by creating performances that are engaging, inclusive, and relevant.

Rosie received her BA in Theatre Arts from UC Santa Cruz in 2014. Shortly before leaving Santa Cruz to move back to her hometown of Los Angeles, she formed The Attic Collective, a theatre company devoted to new work and devised performances. In 2015, her theatre company’s production of Dead Dog’s Bone won the Encore Producer’s Award at the Hollywood Fringe Festival, with Rosie nominated for Best Direction. The Last Croissant, her second Hollywood Fringe Festival production with The Attic Collective in 2019, was nominated for numerous awards and won Best of the Broadwater, Best Ensemble Production, and the coveted Top of the Fringe Award.

Rosie has worked as a director, assistant director, dramaturg, producer, and theatre educator at theatre companies across and beyond Los Angeles, including Bootleg Theater, Portland Center Stage, Sacred Fools Theater Company, and Son of Semele Ensemble. She was named a 2020 Theatremacher by the Alliance for Jewish Theatre and has been a member of LMDA (Literary Managers and Dramaturgs of the Americas) since 2019. In her work as Literary Manager at Inkwell Theater she created a monthly cold reading series called “Playwright’s Night” which, since going virtual during the Covid-19 Pandemic, has connected playwrights, actors, and theatre lovers across the world and provided a platform for diverse writers to have their work heard.