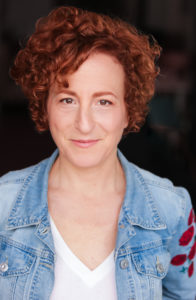 REBECCA JOY FLETCHER is a theater-maker, actor, singer, Jewish educator, and public speaking/leadership presence coach for a wide range of organizations and private clients. Originally ordained as a cantor, Rebecca now spends all her time touring, performing, and teaching.

Theater-maker highlights include her show Kleynkunst!, produced off Broadway by the National Yiddish Theater-Folksbiene; her Metropolis which premiered at La Vieille Grille in Paris; her Cities of Light, which has been presented at theaters around the world; and Ringing True, which premiered at the Miami Theater Center. As an actor in Chicago, favorite roles include Duchess of York in Muse of Fire’s Richard III, Dora Strang in Madkap’s Equus, Betty Bumbrake in Peter & The Starcatcher, and understudying Indecent at Victory Gardens.

A Jewish and arts educator, Rebecca has served as teacher, workshop facilitator,

and artist-in-residence at universities, synagogues, and schools around the US, Europe, and Israel, often in conjunction with one of her performances. As a coach, Rebecca works with a wide range of leaders – from Rabbis to CEO’s – helping them hone their communication skills and enhance their leadership presence towards greater authenticity and freedom.

Rebecca’s grants and awards include a Theatre Communications Group-ITI grant for research and performances in Warsaw and a European Association for Jewish Culture grant for work in Paris.