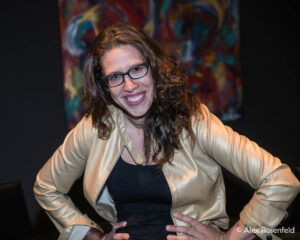 Two days after Michelle Slonim gave birth to a baby girl, Michelle received an email saying she was cast in a sketch for Late Night With Seth Meyers. Michelle had gone on tons of auditions: once in a chicken costume, another time in a bikini while eight months pregnant, and she never got the part. Now a week after her baby was welcomed into the world, Michelle’s in hair, makeup and wardrobe, on set for a major network television show. She plans to have a second child so she can make an appearance on Conan.

Michelle has appeared on web-shows for Comedy Central and HBO and on SiriusXM Radio. You can see her performing stand up comedy in most clubs and bar shows in New York City. Michelle trained at the University of Michigan and the Williamstown Theater Festival, as an apprentice to Lewis Black. She is a seasoned producer having worked on 24 Hour Celebrity Plays on Broadway and produced shows at Webster Hall and Le Poisson Rouge. Special guest performers on her shows have included Dave Attell and Greer Barnes from the Chapelle Show. Though happily married now, for her Anti Valentine’s Day Comedy Show, she was prominently featured in The Wall Street Journal, although as her mother pointed out, it was only on page two in the print edition. Michelle’s side hustle is putting on comedy shows in people’s living rooms – check out LivingRoomLaughs.com since COVID she puts on virtual comedy shows. Speaking of virtual comedy shows….

Check out her virtual standup comedy game show called Truth or Laughs. For as long as comedians have told stories, audiences have wondered, “Did that really happen?!? “Truth or Laughs?” is a virtual, interactive comedy show where you can win real money. It takes the audience behind-the-scenes of funny stories with hilarious reveals.

Finally, (and then we will be done talking about Michelle), Michelle and her husband Ben have an illustrated humor book New Parent Smell: Funny Thoughts on Pregnancy, Newborns and Tots.