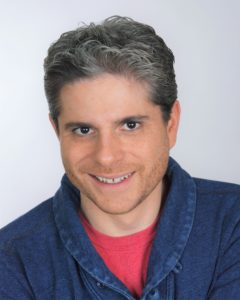 JESSE BERNSTEIN is a graduate of Northwestern University’s School of Speech and has nearly 30 years’ experience working in film, TV and theatre. He has performed Off-Broadway and at regional theatres across the country, including the New York Shakespeare Festival, the Berkshire Theatre Festival, the Arden Theatre Company (where he originated the role of Reuven in Chaim Potok’s The Chosen), Ventura Theatre Company and the Walnut Street Theatre Company. TV appearances include Law & Order, Veronica Mars and Days of Our Lives.

His directing credits include The History of Comedy (Abridged) (Cardinal Stage), The Gifts of the Magi, Shipwrecked!, Ivy and Bean, Little Mermaid (Jr.), Aladdin  (Jr.), Honk (Jr.) and It’s a Wonderful Life: The Radio Play (Walnut Street Theatre), Peter and the Starcatcher (Drexel University), Member of the Wedding (Rutgers-Camden) and several productions for the National High School Institute and Northwestern’s WAVE Productions.

Writing credits include the one-person shows Ethics of the Fathers (aka The Gangster and Grandpa) and The Scribe (for Theatre Ariel), several successful outreach plays and the book for a musical commissioned by 11th Hour Theatre Company. Jesse wrote, produced and directed the short film Allergy (official selection, Audience Awards and LA Comedy Shorts Fest) and wrote, produced, and starred in the short film Us One Night alongside Alison Brie and Liza Weil (official selection, Williamstown Film Festival and New Filmmakers LA).

He has also taught for theatres and organizations in Los Angeles, New York and Philadelphia, including Philadelphia Young Playwrights, Northwestern University College, NHSI (“Cherubs”) and University of the Arts. He has also lectured on public speaking at Drexel University, the Philadelphia Defender’s Association, PennMed and the Montgomery Bar Association. Proud member Actors’ Equity and SAG-AFTRA.

The Ethics of the Fathers (aka The Gangster and Grandpa): An unlikely friendship puts rabbinical ethics and a grandson’s self-image to the test. From Newark street fights to Congressional hearings, mobsters to Moses, this one-person show about morality and legacy tells its uniquely Jewish-American story with humor, thoughtfulness and love.

The Scribe: 2,500 years after compiling the Torah, a Scribe wrestles with its genesis and tries to come to grips with the legacy of his work — a bestseller, no less! — and the consequences of his having been the human mind that organized the word of God.