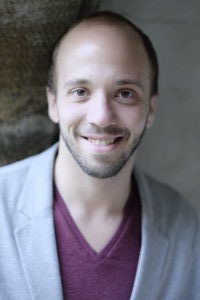 Eli hails from Niles, Illinois and is a member of the vocal band Listen UP!, as well as the coordinator for AJT. He has helped many up and coming artists and theatres with networking, marketing, and organizational development. Eli has also spent time both in America and Israel working on his own infusion of the sacred and secular through movement delving into how the language of movement can be used to express religious and spiritual identity. He received a BFA in Theatre Arts from the Theatre School at DePaul University.