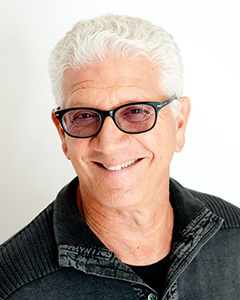 Shalom Vietnam which won the Audience Award at the Stella Adler One Act Fest in LA. And received a staged reading at the William Inge New Play Lab in Independent, KS.

The Brothers Abelson Since 1946, is a work-in-progress that centers around two generations of a southern Jewish family in the midst of a collapse following the sale of the family business. It received a staged reading this fall at the Actors Studio – West Playwrights Unit where he is a member.

Six of the eleven one-acts that compose the Richard Nixon Sex Tapes cycle were produced in LA at Stella Adler Theatre and Stephanie Feury Studio Theatre).

TV credits include: Taxi, Kate and Allie, The White Shadow.

Novel: A Short History of a Tall Jew.

Memoir: Daddy, The Diary of an Expectant Father (translated into German and Korean).