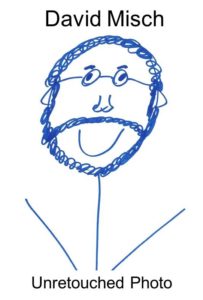 David Misch is an award-eligible screenwriter, playwright, teacher and author. In his pre-career career in Boston, he wrote political satire, hosted a live music radio show and per­formed as a comic folksinger and stand-up comedian. His song “Somer­ville” was re­leased nationally by Fretless Records and he was named “Best Come­dian In Boston” by Boston Maga­zine.

He moved to Californ­ia to write for “Mork and Mindy”, which was nominated for two Emmy awards, and co-wrote “Leave It To Dave”, the pilot for David Let­terman’s first talk-show.

He’s since written, created and/or produced programs for all the major networks and many of the major (and minor) cable ones. Among his credits: he co-wrote and directed an episode of the syndi­cated series “Mon­sters” which was chosen for compe­tition at the Banff International Televis­ion Fes­tival; Executive Story Editor on the legendary Zucker-Abrahams-Zucker series “Police Squad!”; guest writer on “Saturday Night Live”. He also wrote the TV-movie “Behind The Camera: The Unauthorized Story of ‘Mork and Mindy’” (NBC) and was Special Consultant on “The Muppets Take Manhattan.”

David has two books: “A Beginner’s Guide To Corruption” and “Funny: The Book / Everything You Always Wanted To Know About Comedy”, which has been called “the best book on comedy ever written by David Misch” by comedy authority David Misch. He’s also been published in The American Bystander magazine and the anthologies “May Contain Nuts” (Harper) and “Faith: Believers, Agnostics, and Atheists Confront the Big Questions” (Atria); he blogs for The Huffington Post.

Through the Jewish Book Council, David toured 14 cities in support of “Funny: The Book”, including the St. Louis Jewish Book Festival, the Jewish Alliance Book Festival in Jacksonville, and JCCs/synagogues in Montgomery, Westhampton, Houston, Portland, Scottsdale and Virginia Beach.

But what the hell about theater?!, I hear you cry. David’s written two plays: “Occupied” is in development at the Skylight Theatre in Los Angeles, and “Pretty Naked People” is not. He’s also had one-act plays produced in New York and Los Angeles.

More, much more, at davidmisch.com.