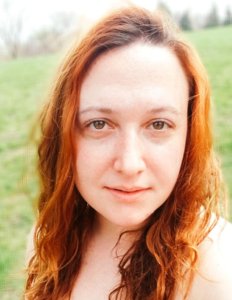 Danielle Levsky is an actor, journalist, poet, and creator of clown characters Ella the Clown and Baba Yana. She recently portrayed the role of Eugene Ionesco in “Beckett: A Show About Nothingness” and Mary in “Ayn Rand’s It’s A Wonderful Life”, and has performed clown pieces at Victory Gardens Theater, the Annoyance Theatre, Theater Wit, Prop Thtr, the Newport Theater, among others. She is an Associate Producer for The Conspirators and the Social Media Manager and board member for the Alliance for Jewish Theatre.

Outside of performing, she is an experienced arts and culture writer. Her work focuses on featuring people, ideas, and principles that highlight the experiences of diverse audiences; she has covered community news, arts/culture reviews, lifestyle editorials, and arts/culture events for several publications. A former pagination designer/copy editor for the Chicago Tribune, her work has been published in Newcity Magazine, Hellogiggles, Mental Floss, Thrillist, Pittsburgh City Paper, Femsplain, Scapi Magazine, Hooligan Magazine, among other publications.