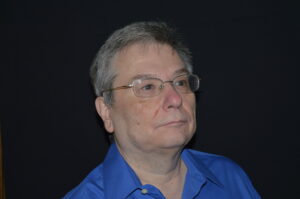 Licensed to practice in Illinois, Charles’ law practice is concentrated in the areas of entertainment, real estate, and estate planning. He is a graduate of John Marshall Law School. His undergraduate degree is in Economics from Elmhurst University.

He is the founder and artistic director of Grippo Stage Company, Inc., a 501 (c) (3) public charity, which uses theater to fight bigotry and hate. He produced the world premiere of The Ben Hecht Show, written and performed by James Sherman, as well as a revival of James Sherman’s popular comedy The God of Isaac. With Dennis Zacek, he co-produced Confessions of a P.I.M.P., written and performed by Tony Award winning (c)  actor Andre De Shields.

He is the founder and artistic director of New Lincoln Theatre, Inc., a for profit theater company, which has produced such shows as The Odd Couple (Female Version),  Alan Bowne’s devastating story of love in the plague years Beirut, and his own plays Sex Marks The Spot and When Angels Wept.

His own plays include Sex Marks The Spot, Wait For the Wind, When Angels Wept, Santa’s Children, and A Wife’s Tale. They have been presented in theaters in Chicago, Ojai, California, Indiana, and off-off Broadway. Recently Charles updated one of his most popular plays A Wife’s Tale, a monologue for a woman in her forties, to reflect current attitudes on gender identity.

Charles is available to present legal and business workshops and webinars to groups and organizations. (In 2019 he presented a workshop on “New Opportunities for Financing Theater” at the AJT National Conference in Chicago.) He also publishes two newsletters – one for playwrights and another for theater management. Subscriptions are FREE and sign up forms are available on his website. www.charlesgrippo.org

He is particularly interested in comedy, especially Neil Simon, the Sid Caesar gang, and Second City. He loves musicals from the Golden Age of the Broadway Musical. His favorite places for travel are New York City and the entire state of California. He likes revivals of the classic movies on the big screen. He plays piano and the Hammon B3 organ.