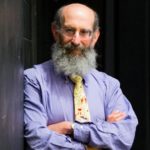 Scholar-practitioner Cary Mazer started writing plays in 2012, most of which are about Jews, Theatre, or Jews and Theatre.   His play, SHYLOCK’S BEARD, won the 2016 Award for Excellence in Playwwriting from the Asociation for Theatre in Higher Education (ATHE).  In his day job, he is Professor of Theatre Arts and English at the University of Pennsylvania, where he has been involved in the undergraduate Theatre Arts major for decades.  He has directed plays at Penn, worked as a free-lance professional dramaturg, and was theatre critic for The Philadelphia City Paper for fourteen years.   As a scholar, he has written books and articles on Victorian and Edwardian Theatre, Shakespeare Performance History, Modern Drama, and Dramaturgy.