Jewish Theater Work: Bryan wrote the words, music and book for Consoulation: A Musical Meditation which premiered in Winnipeg in April, 2018. 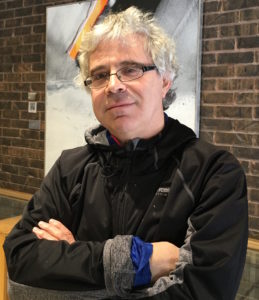 One reviewer described it as a “great, great journey…entertaining…powerful…a lot of humor.” Another said it “revealed a budding Sondheim in our midst…an ever-timely reminder of the profound comfort and healing power of art.” Please feel free to visit https://consoulation.com for more information.

The 90-100 minute production is built around a narrative and two dozen original songs in almost as many styles. A man learns that his father has just passed away. His own little son asks “is your father in heaven?” In struggling to answer that question, the man looks back on his own life and that of generations that came before. It explores the conflict between realism and faith, and the potential consolation of art.

The encounter with Jewish tradition is direct and intense. There are extensive reflections on the bible, the Talmud as well as modern culture; some of the songs are in modern idioms like Jazz and blues, but others are based in traditional liturgical music. 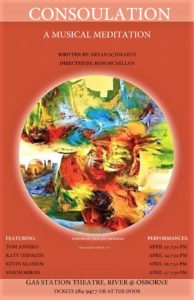 In the premiere, the ensemble of four actors each play multiple characters, and are backed up by a small band. The settings and lighting can be simple. Bryan has prepared two CDs which studio versions of all of the songs that can potentially be included, and written scores exists for all of them. That key to performance, as the premiere showed, is a director and performers who fully embrace its wide and conflicting range of emotions and ideas.

Bryan is looking for theatre groups who wish to perform the piece. He would be very happy to help adapt the book and selection of songs for any troupe in light of its own vision.

Bryan hopes that Consoulation can be a significant contribution to way Jews and non-Jews understand the past, present and future of the Jewish people. He has done his best to create a theatre piece that can engage an audience for every second while it performed – and inspire recollection, revisiting and reflection for years after.

Bryan’s Background: Bryan holds a doctorate in law from Yale Law School and holds an endowed chair at the University of Manitoba law school. He is a legal counsel at well who has argued cases at the Supreme Court of Canada and participated in international dispute resolution panels. For more information, please feel free to visit http://news.umanitoba.ca/not-your-ordinary-law-professor/ and more generally http://bryanschwartzwp.bryan-schwartz.com/.