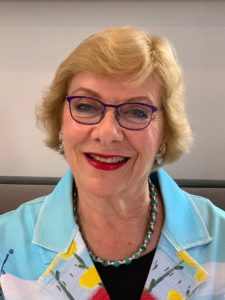 Barbara Wallace Grossman is a Professor of Theatre at Tufts University. She is a theatre historian, voice specialist, director, and author with strong interests as a scholar and practitioner in contemporary musical theatre, Holocaust- and genocide-related theatre and film, voice and speech, directing, and arts advocacy. A presidential appointee to the National Council on the Arts (1994-1999) and the United States Holocaust Memorial Council (2000-2005), she was Vice Chair of the Massachusetts Cultural Council from 2007-2019. She currently serves on the American Repertory Theater’s Board of Advisors, MassCreative’s Board of Directors, the Anti-Defamation League’s New England Regional Board, and is active with Jewish Arts Collaborative’s TheaterWorks series.