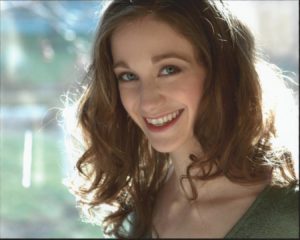 Amy Oestreicher is a PTSD Specialist, Audie award-nominated playwright, performer, and multidisciplinary creator. Amy overcame a decade of trauma to become a sought-after trauma-informed teaching artist, author, writer for The Huffington Post, international keynote speaker, RAINN representative, and health advocate. She has given three TEDx Talks on transforming trauma through creativity, and holds the record for the only woman to gives TEDx Talks for three consecutive years, reaching nearly 15K views. Her story has appeared on NBC’s Today, CBS, Cosmopolitan, Seventeen Magazine, The Washington Post, Good Housekeeping, and MSNBC, among others and she’s contributed to over 80 print and online publications. A singer, librettist, and visual mixed media artist, she dedicates her work to celebrating everyday miracles, untold stories, and the detours in life that can spark connection and transform communities. Amy has toured her autobiographical musical, Gutless & Grateful, to over 200 venues from 54 Below to Barrington Stage Company since its 2012 NYC debut, as well as a mental health program for colleges, conferences and organizations. She is currently developing her full-length play, Flicker and a Firestarter, on the dichotomies that emerge after trauma, and More Than Ever Now, a play based on her grandmother’s story of survival. She most recently premiered her one-woman multimedia musical, Passageways, at HERE Arts Center, for which she created music, book, lyrics, and artwork.

As the 2014 Eastern Regional Recipient of Convatec’s Great Comebacks Award and WEGO Health  “Health Activist Hero”, and WeGO Health Expert, medical community, speaking for National WOCN conferences and the American College of Surgeons Clinical Congress, and writing for the official print publication of the UOAA.  She has devised programming for the Transformative Language Arts Network National Conference, the Eating Recovery Foundation, the 40th Anniversary New England Educational Opportunity Association Milestones Conference, three Annual National Mental Health America Conference, and others. She has been the featured keynote speaker for national conferences including the Pacific Rim Conference of Diversity and Disability, the International School of Social Work Conference, and Women of Resilience.

As a playwright, Amy has received awards and accolades for engaging her audiences in dynamic conversation on trauma’s effects on society, including Women Around Town’s “Women to Celebrate” 2014, BroadwayWorld “Best Theatre Debut,”  Bistro Awards “New York Top Pick, and the “Singular Award” at the Sarasolo Theatre Festival, presented annually for a “performance that is exceptionally uncommon, groundbreaking, original and inventive.” Amy has performed excerpts of her solo oral history play, Fibers, as part of Brooklyn’s immigrants and Exile, Beechwood Art’s Giving Voice, Dixon Place, Seekonk Storytelling Television Special, and Museum of Jewish Heritage Festival of Untold Women. She is a cabaret and theatre reviewer for BroadwayWorld, Her theatre education essays and monologues have been published in Creative Pedagogy journals, as part of a theatre curriculum for high school students in the Philippines. Her play, “We Re-Member” honoring the immigration stories of her grandparents, has been performed in twelve states, and her full-length Play, Factory Treasure, has been performed at the Philadelphia Arts Center, Identity Theatre, LIU, The Depot, and Actors Theatre of Newburyport. Her short plays have been published by the Eddy Theatre Company and finalists in Manhattan Repertory Theatre’s Short Play Festival, as well as NYC Playwright’s Women in the Age of Trump.

Amy’s collaboration with Beechwood Arts on the immersion salon, “Resilience and the Power of the Human Spirit”, has traveled around the world to health and arts facilities as a public installation, incorporating her monologues, art, writing and recipes to express the life-altering detours and ultimately the invaluable gifts of her resilient journey.  Amy is also an active artist and teacher in the Jewish community, being honored by United Way in 2005 for her music programs at Hollander House, completing artist residencies at Art Kibbutz, and delivering “Hope, Resilience & Biblical Women” keynotes for synagogues and religious schools.  Her theatre education essays and monologues have been published in Creative Pedagogy journals, as part of a theatre curriculum for high school students in the Philippines, and as a teaching artist, she is a strong advocate for arts integration and education. She is a teaching artist with Brooklyn’s Community World Project, and trained ACTSmart, a Playback Theatre troupe in Amherst, MA.  She is also a passionate arts education advocate, a successful mixed media visual artist, a continuing education studio arts teacher, and her artwork has been shown in esteemed galleries in Massachusetts, Connecticut, Chicago, San Diego and New York, as well as published in national publications including Conquer, Topology and Cargo Literary. She has recently published her memoir, My Beautiful Detour: An Unthinkable Journey from Gutless to Grateful. See more at www.amyoes.com.