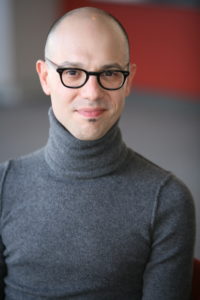 Aaron Henne is the artistic director of theatre dybbuk, a company whose work focuses on Jewish folklore and history and whose projects include cave…a dance for lilith, exagoge, and lost tribes.  In addition to his work as theatre dybbuk’s Artistic Director, Henne’s plays include King Cat Calico Finally Flies Free! (published by Original Works Publishing) and Sliding Into Hades (LA Weekly Awards for Playwriting and Production of the Year). His exploration of machines and their relationships to humanity, Body Mecanique, was developed and produced by LA Contemporary Dance Company (LACDC). Henne was commissioned by The Natural History Museum of Los Angeles County to create new pieces about the natural world for that institution’s family audiences.

His multimedia adaptation of a 12th Century epic poem, collision/ theory’s Blood Red Lost Head Dead Falcon: The Nibelungen, was a partner in the LA Opera’s Ring Festival LA. Mr. Henne’s investigation of Kafka’s novel The Castle, called A Man’s Home, as well as his play Mesmeric Revelation (SF Bay Area Theatre Critics Circle Award for Original Script), a clash of science and mysticism, were both developed and produced by Central Works in Berkeley, CA.

Aaron previously served as Co-Literary Manager at the Theatre @ Boston Court, Playwriting Instructor for the Robey Theatre Company, and Educational Program Director for We Tell Stories.

He teaches storytelling throughout the country and has designed and facilitated workshops for Lucasfilm, Pixar, and Dreamworks. He was an American Jewish University Dream Lab Fellow and the Diane Luboff Scholar at the Cutter Colloquium at HUC-JIR. Aaron has also served as a professional mentor at Otis College of Art and Design, as faculty for Georgetown University and for the Wexner Heritage Program, and as a consultant for a wide variety of organizations.

Aaron is fortunate to be a Pilot Wexner Field Fellow.