Theatrical Agents: Do You Need One, How to Find One, and How to Work With One

Theatrical Agents: Do You Need One, How to Find One, and How to Work With One
featuring Jill Rafson, Leah Hamos, Ben Izzo, and Sam Barickman
Thurs. May 5 at 7:00 PM ET 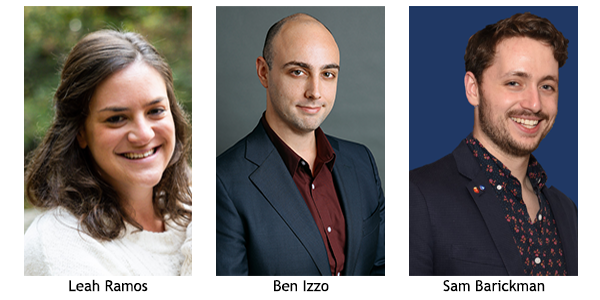 Join Leah Hamos (Gersh Agency) and two other respected theatrical literary agents (Ben Izzo from A3 and Sam Barickman from ICM) for an enlightening panel discussion on the work of theatrical agents. How do you know when it’s time to find an agent for your work? How do you identify the right agent for you and get onto their radar? And how do you work with them once you have an agent? This eye-opening conversation, moderated by Roundabout Theater Company Associate Artistic Director Jill Rafson, will offer AJT’s community a direct insight into what can seem one of the most obscure parts of our industry. Bring your questions!

Ben Izzo is a Literary Agent specializing in the representation of playwrights, directors, composers and theatrical designers. Izzo previously held positions at Roundabout Theatre Company and New York Theatre Workshop, and served as an associate producer for the inaugural season for Fulcrum Theatre Company in New York City. He has been a past judge for the New York Musical Theatre Festival and the Kleban Prize.

Leah Hamos is a Theatre Agent at The Gersh Agency where she works with writers, directors, and designers, among others. Previously, she worked at Abrams Artists Agency in the literary department, and with New York Theatre Workshop and the Lark Play Development Center in development and dramaturgy, respectively. She has served on the reading committee for the Lark’s Playwrights Week and as the dramaturg on a variety of projects at organizations such as the Lark, Judson Memorial Church’s Magic Time, Woolly Mammoth Theatre Company and Rorschach Theatre. Leah received her BA from Emory University with a double major in Theater and Sociology, and her MA from New York University’s Gallatin School of Individualized Study with a concentration in Theater Management and Dramaturgy for new plays.

Sam Barickman has been a theater literary agent at ICM since mid 2020, working with artists such as James Ijames, Julia Izumi, Lisa Portes, Noah Diaz, and Miranda Rose Hall. He previously served as coordinator in the department after being selected for ICM’s Agent Trainee program in 2018. In this role he has had the pleasure of collaborating on clients including Stephen Trask, Yael Farber and Eboni Booth. Sam joined ICM in early 2016 as an assistant in the Theater department and worked closely with artists such as Jeremy O. Harris, Taibi Magar and Antoinette Nwandu. Before ICM, Sam trained mainly in non-profit theatrical producing at Actors Theater of Louisville, Steppenwolf Theatre Company, and Goodman Theatre. He received his B.A. from Kenyon College with dual degrees in Drama and French Literature.